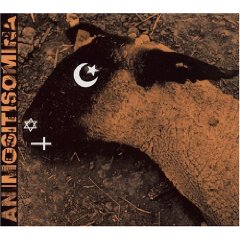 Already written off by many fans, yet Ministry dares to produce another album after the last two weren’t exactly “well received”. But now that songwriter Al Jourgensen is clean, we don’t need drugs anymore to sharpen you up and make you ready for a bit of the old Ultra-Violence. Ministry’s latest effort, Animositisomina, is enough. Ministry was one of those groups during the late eighties / begin nineties that brought industrial metal to the attention to the bigger public. With classic albums such as The Land Of Rape And Honey, The Mind Is A Terrible Thing To Taste and the hostile & aggressive Psalm 69 – the latter probably being equally important to the genre as Nine Inch Nails’ Pretty Hate Machine – Ministry reached its peak. Drugs abuse and the spreading the musical inventiveness of Al Jourgensen and Paul Barker out over numerous side-projects with often hilarious names such as The Revolting Cocks, 1000 Homo DJs, Buck Satan and Pailhead made Ministry but a shadow of what it was. Their later albums became a copy of their earlier work, and thus many people though the band was more or less dead.

Although I can’t deny that Animositisomina (which is the word animosity spelled forwards and backwards, minus the “y”) isn’t exactly groundbreaking, this new work purred away real horrorshow. A nice warm vibratey feeling all through your guttiwuts. The band still has the energy to put the harsh and raw metal riffs, characteristic filthy vocals and almost danceable industrial rhythm patterns together and actually make it listenable. You can feel the anger and the hatred inside these men coming through your speakers.

It already starts with the hard title track Animosity, almost similar to what Ministry did a decade ago: catchy riffs, pounding beats and raw vocal lines. The opening riff on the short second track Unsung is incredible. It was like for a moment, O my brothers, some great bird had flown into my room and I felt all the malenky little hairs on my plott standing endwise and the shivers crawling up like slow malenky lizards and then down again. The enormous dirtiness of this track is putting the beautiful chorus with the clean vocals in the spotlight. The following Piss and Lockbox have an impact like you’ve been beaten up with a baseball bat. The fifth track, Broken, might as well be one of the best tracks Ministry has brought forward. Oh bliss, bliss and heaven. Oh it was georgeousness and georgeosity made flesh. It was like a bird of rarest spun heaven metal, or like silvery wine flowing in a spaceship gravity all nonsense now as I slooshied I knew such pretty tunes. That the brilliance of old classics such as Just One Fix and Jesus Built My Hotrod shines through is as clear as an unmuddied lake. As clear as an azure sky of deepest summer.

The album goes on. With the cover of Magazine’s The Light Pours Out Of Me and the strong Shove influences such as Jane’s Addiction and Joy Division are not forgotten. Toying with the stereo sound in the beginning of Impossible, Ministry blasts off the listener to another dimension when the song starts for real. This track rocks. The sounds are real horroshow, you could slooshie the screams and moans very realistic. Ministry is angry and full of energy and inspiration, and you will feel it to the bone. The noisy Stolen and the long instrumental Leper end the album in a way they did more than ten years ago.

As Ministry’s ninth studio album, I feel that Animositisomina stands out as one of the strongest outputs of this band. Ok, the surprise factor and the innovation are gone but what would you expect in these days? It certainly won’t set new standards in the genre but I don’t think many albums do nowadays. This piece certainly deserves more praise than it got in the media so far, who only seem to look back. Ministry looks forward and made the industrial metal album for the new millennium. Ministry is cured all right.

Some citations brutally stolen from the movie A Clockwork Orange and used without permission. Ha!